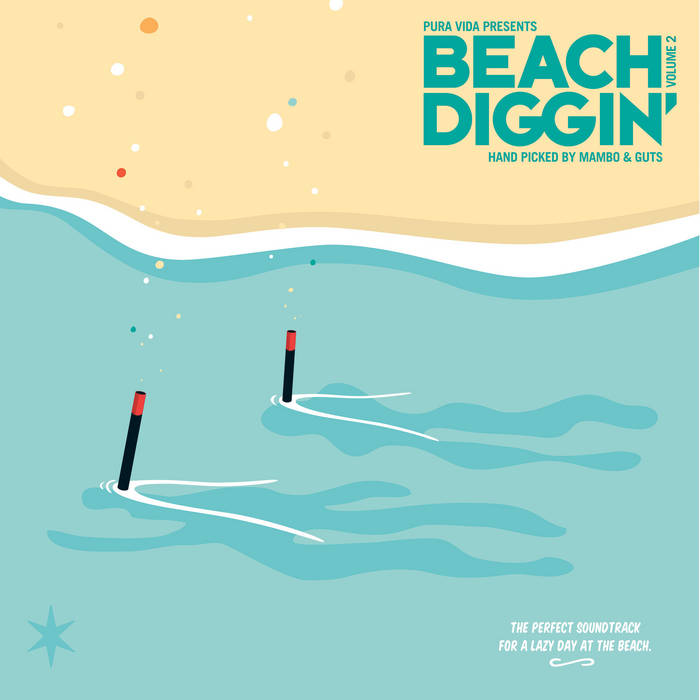 Guts & Mambo were lying on their loungers watching the sun dip into the sea one early evening when they suddenly remembered that they had to make a follow-up to their Beach Diggin’ selection.

So did they jump out of their deckchairs? Not really, because this pair of diggers are constantly scouring the shelves, sniffing out rare vinyl and digging up unlikely grooves, flushing out tracks that are too shy to strut their stuff and would rather hide away in the middle of a B-side of a 33 rpm of dubious value.

Starting out with a mass of tracks, the two buddies slimmed them down and refined them over months of listening and selecting to make sure they didn’t just come up with a pale copy of the first compilation, or an obvious sequel. Although the Caribbean and Latino waves did wash up some splendid shells with a pearly tinge of soul, a shimmer of reggae, a marbling of jazz, bossa or funk, Guts & Mambo sometimes had to swap their flip-flops for their hiking boots and strike out far from their sandy shores. Yet even if they were produced in regions where the beach and the ocean are just a distant rumour, the singles they brought back from Missouri, England or the Venetian hinterland have much in common with their comrades on the playlist: they make people want to let their hair down and dance, live life to the full or embrace each other on lazy days when the mercury is nudging the top of the thermometer. The sun is still there, but it’s not going to burn those reckless enough to brave its rays. It’s hot here, but it’s bearable, desirable even.

It’s World Cup year in Brazil, the Holy Land of Beach Diggin’, and this second volume contains some high-volume good sunny vibes to be sipped through a straw while you admire the scenery and forget all about your watch, your troubles and your duties. Beach Diggin’ is a state of mind…


"the perfect soundtrack to chill on the beach."

Bandcamp Daily  your guide to the world of Bandcamp